From  building to building, home to home, families faced the aftermath with mournful loss of life and knew  the future would never be the same. Please visit the link below to revisit the day the tornado dropped on Tuscaloosa and surrounding areas.

A Look Back on April 27th and How You Can Help

Ten-year-old's compassion leads to reaching out to children! 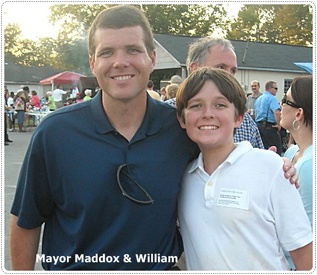 April 27th, 2011 will forever be remembered in history as the worst tornado day in Alabama. It is the day when F3, F4 and F5 tornadoes ransacked and pulverized everything in their tracks, leaving lives shattered: homes destroyed, loved ones dead, hurt, or missing.

The media and witnesses began showing footage and spoke of what they saw and experienced. Word quickly spread about the tornado's path:  5.9 miles long and a mile wide in Tuscaloosa alone. During a press conference Tuscaloosa's Mayor Walt Maddox summed up the aftermath as "utter destruction."

First responders and citizens from far and wide began search and rescue, lending a hand to anyone in need. Businesses and churches banded together to help, since the victims' needs are great and it will take months, possible years to recover from the devastation.

The more news footage one young man saw made him realize just how many kids were sad. At home in Cottondale, Alabama with his mom, William searched his house for any stuffed animal he could find: a total of 46 stuffed  teddy bears located. He told his mom his idea. "Mom, there are so many children hurting. God kept us safe and I want to help children by giving away my stuffed animals..."Cause you know the tornado probably took all their toys away." He began brain-storming about what to call his project. And OPERATION TEDDY BEAR was born! 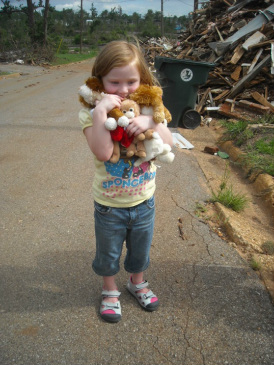 Creighton's home was one of 4 in her neighborhood left standing on April 27, 2011.  A large pile of debris was stacked over 8 feet high on her street. She looked through our bin of stuffed animals and picked out several to share with her friends.

Operation Teddy Bear presents: "If This Were Your Home...." Filmed on location in Alberta City, AL. The video was made to spread awareness for the tornado aftermath.

KNOW OF A CHILD WHO COULD BENEFIT FROM  A STUFFED ANIMAL:  Use our contact form, be sure to give us a contact phone number. Turn around time within 24 hours.

SHARE YOUR STORY: If you are a recipient of a stuffed animal, we'd like to know! Use the Story Form (located under "more..." link) and include a daytime phone number. With your permission, your story and photograph (optional) could be chosen for our upcoming flyer/shown on our website.